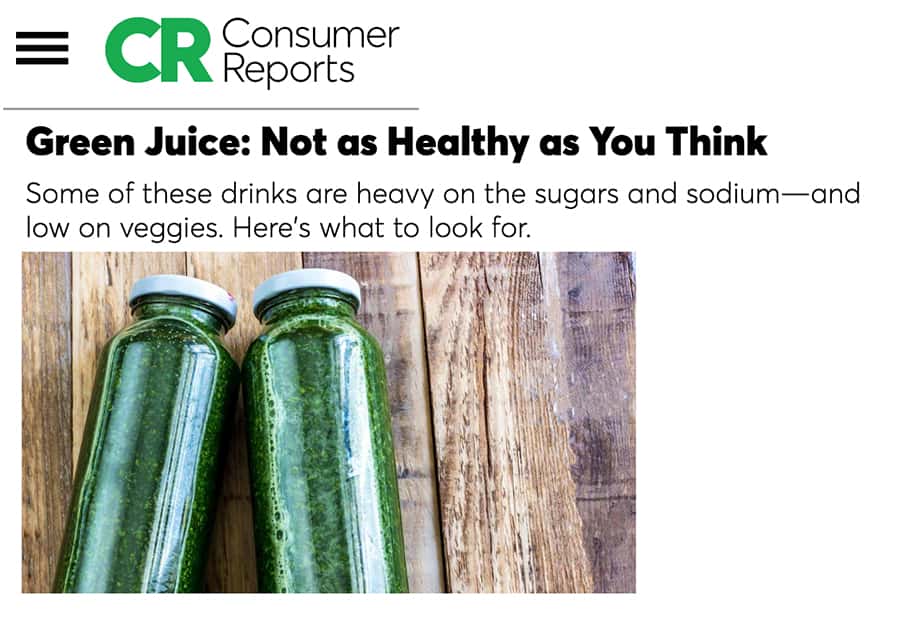 What's the healthiest green drink? According to an article on Consumer Reports, some of the most popular brands fail to meet their strict criteria for what constitutes a healthy green juice. And according to what Consumer Reports says, my recipe has all the  features they regard as healthy, and none of the unhealthy. My Green Drink passes with flying (green) colors!

Recently, the hugely influential consumer advocacy research entity, Consumer Reports, investigated the health claims of leading brands of green juices. Although Chef V wasn’t specifically mentioned, I want to show you how my recipe stacks up against the most popular green juices. Does my Green Drink meet the stringent criteria of what Consumer Reports considers a healthy green juice? Actually, scratch that. We don’t merely want to meet the criteria. We want to blow it out of the water…. And we do.

The report paints a picture of the green drink health craze. What was once a niche product not even a decade ago is now a mainstream product. But as Consumer Reports cautions, not all green juices are good for you.

The Consumer Reports says you should check for sugar, a high veggie to fruit ratio, fiber, and level of sodium when purchasing a bottle of green juice. And we meet or excel in all of them! Just check out the calorie and sugar comparison chart below! 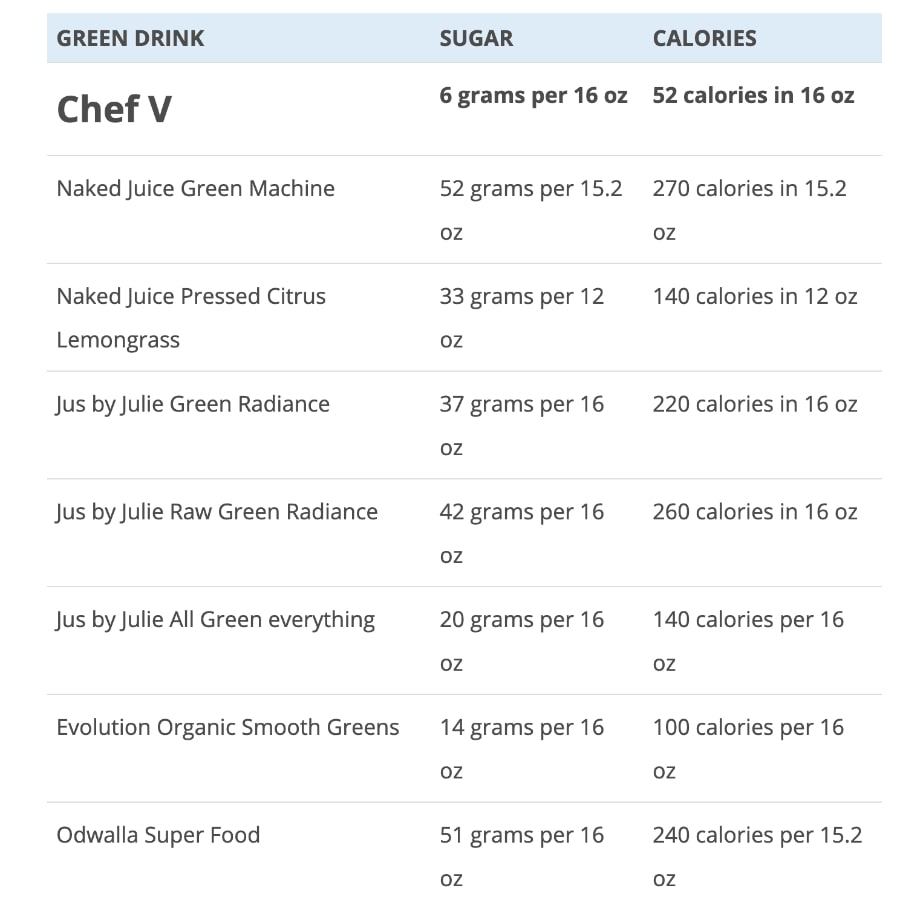 We’re not into naming names and pointing fingers when it comes to our competition. But Consumer Reports does. So we’ll let them do the dirty work. And the first brand that Consumer Reports mentions is Naked Juice. Naked Juice is owned by PepsiCo. You don’t need to have a Ph.D. in nutrition to know that consuming lots of sugar is bad for you. However, Naked Juice Green Machine contains a whopping 53 grams of sugar. That’s even more sugar than in a bottle of PepsiCo’s regular Pepsi soda, which contains about 40 grams of sugar in a can.

When a product is named “Green Machine,” the consumer probably assumes there’s lots of healthy, high-fiber green veggies. However, one may regard the name Green Machine as false advertising. That’s because there’s far more fruit than low-sugar green veggies in Green Machine. And it’s the fruit that gives Green Machine its high sugar content. Eating a small portion of whole fruit won’t skyrocket your blood sugar levels, which ultimately results in a sugar crash. But drinking lots of fruit sugar will.

Moreover, the case for false advertising is strengthened when considering what it says on Naked Juice’s Green Machine label: “no added sugars.” This gives the consumer the impression that it’s a healthy product. But if you were to swallow a quarter cup of table sugar, which is the same amount as in a bottle of Green Machine, you’re also not consuming any “added sugars.” Does that mean it’s healthy? Of course not. In fact, Consumer Reports cautions about the label on Green Machine, “don’t be misled.” 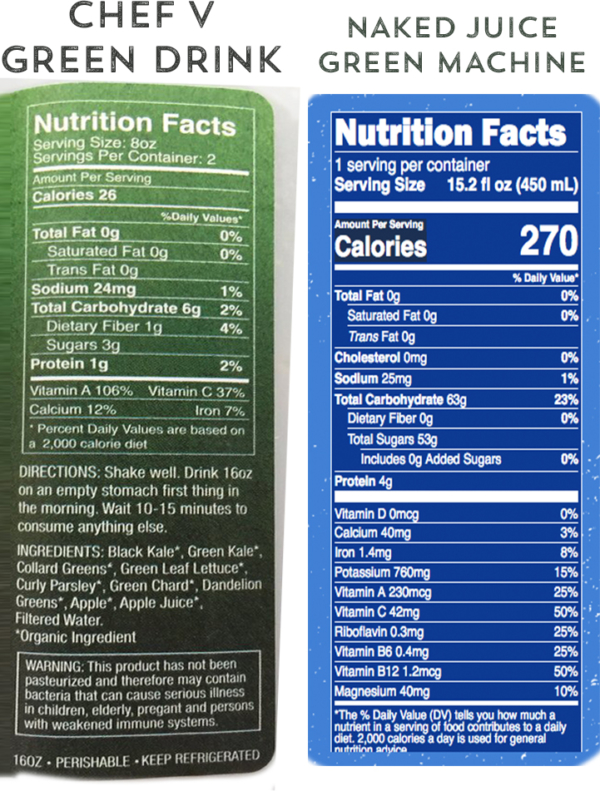 How does Chef V Green Drink fare in Consumer Reports’ criteria for being low in sugar? One 8 oz. serving of Green Drink contains only 3 grams of sugar. Go ahead if you want: drink a whole 16 oz. bottle. That’s only 6 grams of sugar.

The reason Chef V’s Green Drink is so low in sugar is because it contains a lot of vegetables and a minimal amount of fruit. As Consumer Reports explains, “Green drinks that are heavy on apple or other fruit juices have significantly higher levels of sugars than those that are mostly vegetable juice. Although the sugars in fruit juice are naturally present (not added) and fruit juice provides some nutrients, the sugars are processed by your body in the same way the added sugars in soda are.”

Green Machine is not the only Naked Juice offering to be slammed by Consumer Reports. In Naked Juice Pressed Citrus Lemongrass, three of the four top ingredients are fruit juices. Although there’s almost half the sugar in this juice in comparison with Green Machine, it still contains a whopping 33 grams of sugars per 12-ounce serving.

In light of this, Consumer Reports warns, “Beware of drinks that look green but are essentially fruit-juice blends.”

That’s no problem with Chef V Green Drink. It contains seven certified organic green leafy veggies. And it only has a tiny bit of just one fruit (apple).

Fiber is a nutrient that helps you feel full. It also helps push waste out your colon. And fiber also helps slow down the rush of sugar into your bloodstream. But most green juices don’t contain any fiber (bad news if you’re drinking a green juice with 50 grams of sugar). Consumer Reports explains why:

“When you press vegetables to extract their juice, you usually leave the fiber behind.”

We had this fact in mind when we came up with the processing method for our Green Drinks. Instead of pressing the veggies, we cold-blend them. The cold-blending method preserves the fiber contained in the skin of the veggies.

“Unfortunately, most bottled green juices contain less than a gram of fiber,” says the report. But each 16 oz. serving of Chef V Green Drink contains two grams of fiber. That’s a pretty healthy way to start each morning by drinking 7 certified organic green leafy veggies that help you detoxify and contain fiber.

And if you eat one salad for lunch with greens and cook a dinner with them, you’ll get more than enough fiber in your diet.

Most green juices aren’t very high in sodium. That’s because fruits and veggies are naturally low in sodium. Most of them. But some brands of green juices contain as their primary ingredient veggies that contain the most sodium in the plant kingdom. Celery comes to mind. Consumer Reports says Starbucks-owned Evolution Fresh’s Essential Greens contains 300 mg of sodium per serving. In comparison, Chef V Green Drink contains less than a tenth of that amount: 24 mg.

Sodium from natural sources aren’t that much of a health concern. However, considering most Americans consume far too much of it from heavily-processed foods, it’s probably prudent to eliminate extra sources of sodium.

The Consumer Reports article on green juice contains a couple other factors to consider: serving size and label claims. As for the former, we already mentioned that even if you have a 16 oz serving of Chef V Green Drink, you’re only consuming 6 grams of sugar. And as for the latter, we’ll let our customers’ success stories speak for themselves.

Of course we wish Consumer Reports would have mentioned Chef V in their article. It’s definitely our goal that Chef V Green Drink becomes a household name. In the meantime, we take pride knowing that our Green Drink would far exceed the criteria put forth in the Consumer Reports article.