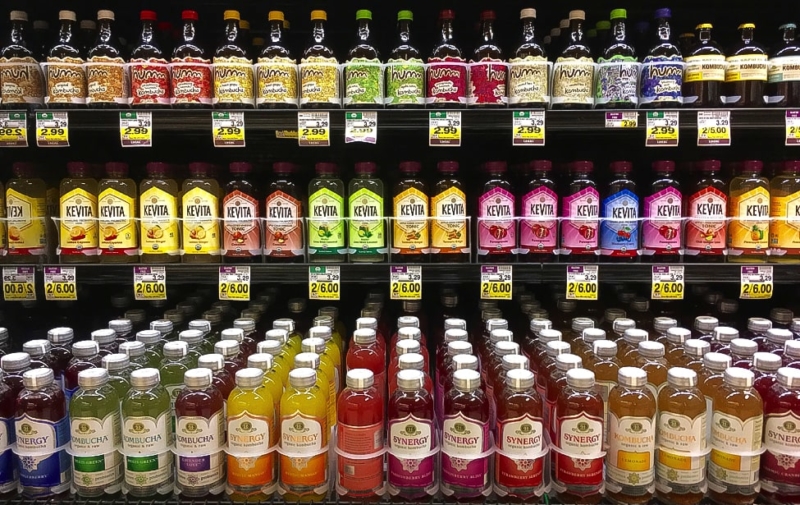 I recently hopped on the kombucha bandwagon and here’s what happened….

Now before I put the wagon before the horse, just in case you’re not exactly sure what kombucha is, here’s a crash course….

It’s fermented tea. That might not sound that appetizing, and the truth is that many kombuchas taste awful. And as I’ve come to find out, I wish all the ones I tried tasted awful because I would have spit them all out, and not experienced any negative side effects (more on this in a little bit.)

The ones that do please the palate have a slightly bubbly mouthfeel and taste tarty. When it’s hot out and you don’t feel like drinking room-temperature water or hot tea, a glass of cold bubbly booch really hits the spot.

And I thought by drinking a lot of it, I was being healthy. That’s because kombucha is supposedly loaded with probiotics. Because of the rise in consciousness with gut health, fermented foods and drinks have become mega popular. That’s why if you go to your local farmer’s market, you’ll see weird fermented drinks that weren’t around 5-10 years ago like beet kvass and, of course, kombucha.

How is it Made?

Traditionally, kombucha is made with either black or green tea. Lately, I’ve seen recipes featuring other tea varieties such as rooibos. I’ve also tried so-called high-alcohol kombucha, which is fermented for longer. All kombucha, because of the fermentation process, contains a little alcohol.

So if you’re in recovery or trying to detox from alcohol, you might want to think twice about drinking a lot of it. People think it’s healthier to get buzzed on high-alcohol kombucha because it contains probiotics.

But one truth about kombucha, at least the kind that can really get you buzzed is that there’s probably very little probiotics left—the alcohol kills it. And high-alcohol booch isn’t safer than drinking beer or wine. On the contrary, BoochCraft and other brands of alcoholic kombucha contain more alcohol per volume than beer and wine.

The process of making regular kombucha is like a science experiment. First, you brew a high-sugar sweet tea.

The high sugar should have been a red flag for me; I was oblivious to the potential dangers because of the hyped-up health claims.

After the sweet tea is brewed, a milky, cloudy, stringy yeast and bacteria starter culture called SCOBY is added. SCOBY stands for symbiotic culture of bacteria and yeast. Yum! The brew is refrigerated for 7-10 days.

No doubt the way kombucha was traditionally made, beginning over 2000 years ago in China, offered health benefits. But today’s booches surely aren't the same as what was made during the Qin dynasty.

One word of caution if you’re going to try to make kombucha on your own: if it’s not prepared properly, it can contain nasty bacteria or mold.

I don’t think I drank any bad batches of booch. But the mistake I made was drinking it every day. I admit: I became addicted to it. And my addiction eventually caused problems. Mostly, I experienced bloating or an upset stomach. Feeling like I was tricked by kombucha, I did some digging and found out that I wasn’t the only one having problems…

Can Kombucha Cause Yeast Infections?

As I read more and more about the dark side of kombucha, I learned that it can cause adult acne. And if you’re concerned about getting a bacterial yeast infection, after reading this next thing, you just might hop off the booch bandwagon forever….

According to this food microbiology journal, after the 7th day of fermentation, candida is the most abundant yeast in kombucha.

Now, don’t freak out entirely about candida. Everyone has a little bit of the yeast in their mouth and intestines (gross, right?). But if you already have an overgrowth of yeast because of a poor diet (too much sugar and starchy carbs), kombucha is the last thing you should be drinking; just stick with lots of water and low-sugar Green Drink!

If you’re struggling with energy; get recurrent UTIs or sinus infections; or have poor digestion and skin problems, these are tell-tale signs of candida overgrowth. If this is the case, go on a candida cleanse and just say no to kombucha! (First steps in a candida cleanse: probiotic supplements, low-carb diet, drink lots of water and Green Drink.)

The Truth About Kombucha: Is It Good For the Gut?

The main selling point about kombucha is that because it’s fermented, it contains beneficial microbes that may help colonize the gut. Gut health is so important and I’m glad that the topic of gut health has gone mainstream. Gut health not only affects our digestion, it’s directly linked to our cognitive function, immune system, and mood.

But the truth about kombucha is we don’t know for sure if it’s even good for the gut. As this study from just last year, published in Nutrients points out, “[T]here are no studies of the effects of kombucha on gastrointestinal health and microbiota in humans.”

Another study, also from last year, reviewed 310 articles about kombucha. The researchers were unable to find even one random clinical trial (the gold-standard of research studies) that proves it can help gastrointestinal disorders, “including any of the functional bowel disorders.”

I realize that random clinical trials are super expensive to run. For the most part, only pharmaceutical companies have a vested interest in running a clinical trial with lots of people. Your average kombucha new kid on the block isn’t going to have the millions to fund an RCT. But I think it’s pretty telling that in over 300 studies on kombucha, the researchers weren’t even able to find one study with, say, 10 people, that offers some proof about kombucha’s supposed health benefits on the digestive system.

But hey, if you love it and you think it works for you, then by all means continue to drink it. Personally, I think it’s overrated, especially the big brands sold in supermarkets. 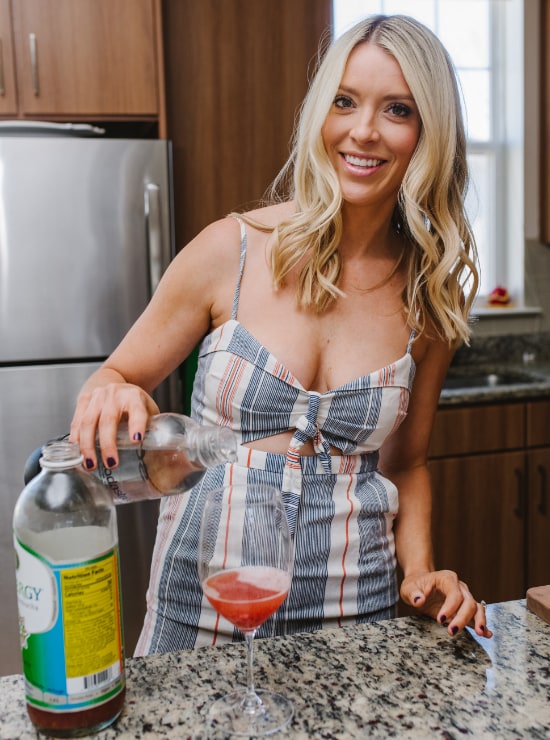 If you want to support your gut health, first of all, you need to limit your sugar intake and consume lots of veggies that contain indigestible prebiotic fiber. Prebiotic fiber feeds the good bacteria in your colon. (Score another point for Green Drink: the 7 leafy greens have the fiber your gut needs.)

And if you want to colonize your gut with even more beneficial microscopic bugs, eat other fermented foods that don’t have added sugar. Think: plain yogurt, kefir, sauerkraut, kimchi (cabbage), and fermented soybean dishes like natto, miso soup, and tempeh.

Is kombucha healthier than cola? Sure. But is it healthier than Organic Green Drink? No way. Is high-alcohol kombucha better for your health than a glass of wine because of the probiotics? I think not. Dry wines contain only 1 gram of residual sugar. Plus you get the anti-aging benefits of the chemical, resveratrol, which is abundant in grape skins.

(Want a boozy drink without the alcohol? Try my low-sugar, high-nutrient-density mocktails.)

I’ve seen some brands of kombucha contain as much sugar as a glass of orange juice (over 20 grams per 8-ounce serving). Drinking that much sugar everyday is just asking for a yeast infection. Even lower-sugar varieties of kombucha, I’ve realized, have too much sugar for my system. (You can water down the booch by making a spritzer.)

And that’s the truth about the booch.