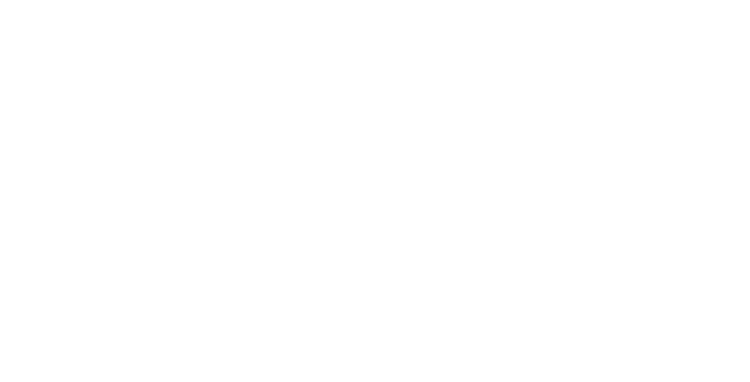 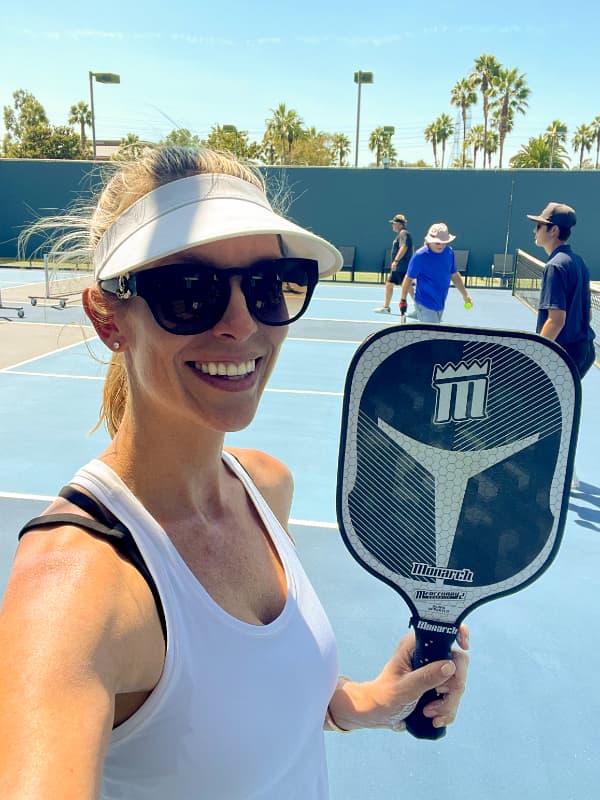 It’s never too late in life to get a new hobby. For “V” (Veronica, the “V” in Chef V), her new hobby is more like an obsession. And she’s not the only one who is mad about pickleball, the fastest growing sport in America.

You’d figure that an unbearable late summer humid heat wave lasting several days with temperatures approaching triple digits would deter V from pursuing her latest passion: pickleball, which if you don’t know is an exciting game that combines elements of tennis, badminton, and table tennis.

It would be one thing if V were playing pickleball indoors. But nope, she’s been playing pickleball al fresco, with not a care in the world that rivulets of sweat are pouring down her face. After all, the entrepreneur behind Organic Green Drink home delivery is a devotee of hot yoga. 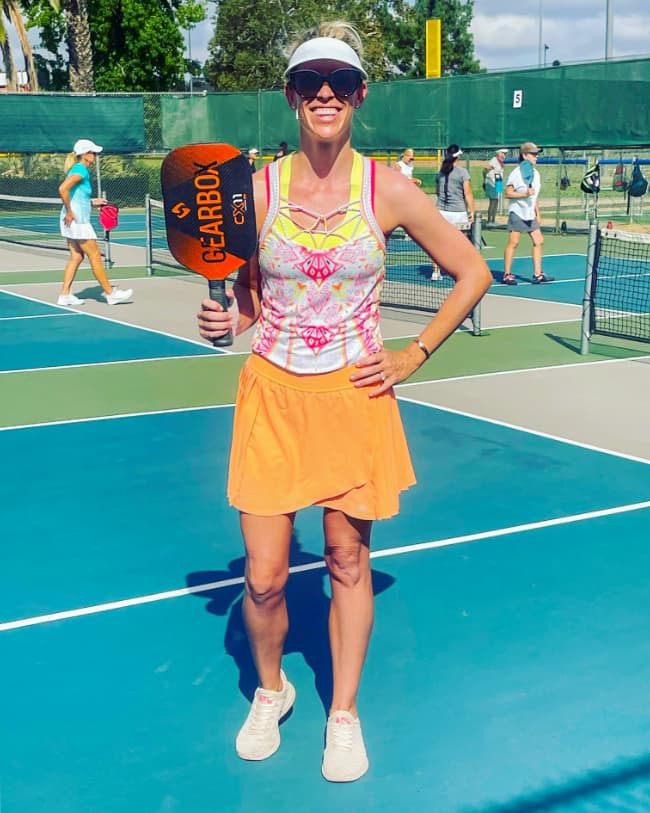 So why has V become so obsessed with playing pickleball, often testing her skills in matches six days a week for the past several months? Well, for starters she’s not alone. According to the Sports and Fitness Industry Association, pickleball participation has grown nearly 40% of the past two years. Currently, there are nearly an estimated 5 million people who regularly play pickleball, making the sport the fastest growing in the U.S. for the second year in a row.

And if V continues to improve her game, watch out, because who knows, it’s never too late for another professional side hustle. In fact, pickleball is such a hot sport that there’s Major League Pickleball (MLP)… who knew? And MLP is no joke. We’re not talking about beer pong prize money here. The winning team from a recent tournament in Newport Beach, CA walked away with a prize of $100,000. Even former NFL quarterback Drew Brees owns a team in the MLP.

Pickleball is clearly not in the same league as beer-guzzling “sports” like darts, horseshoes and cornhole; it’s serious business. Don’t bother showing up unless you plan on bringing your A-game! (Or at least learn how to play with serious intent.) 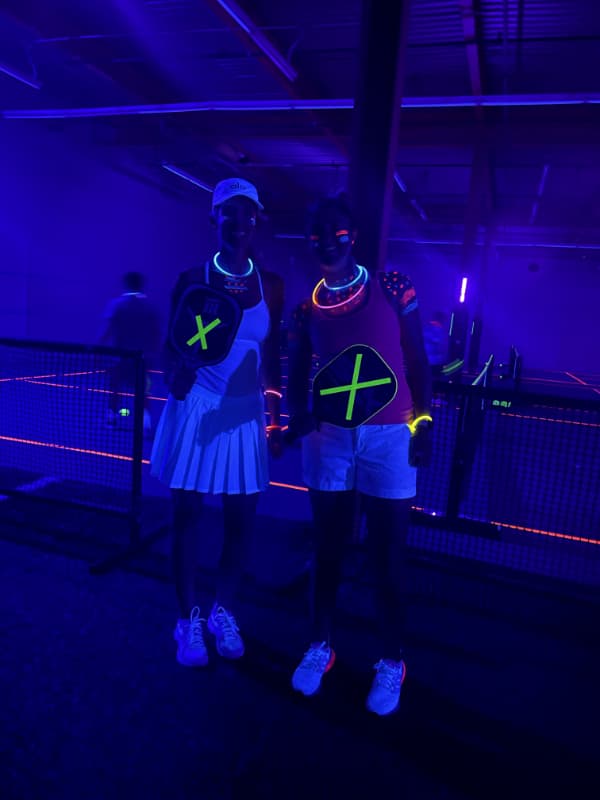 Stay Out of The Kitchen

But let’s get back to V and why she was called to the activity, nay, sport, nay, way of life and obsession. Maybe it’s the fact that there’s an area of the pickleball court called the kitchen. And if you’ve been following V’s recipes over the years, you know she loves being in the kitchen. Although to be sure, in pickleball, it’s a no-no to volley the ball in the kitchen. Perhaps this is the rare time that V likes to be out of the kitchen. 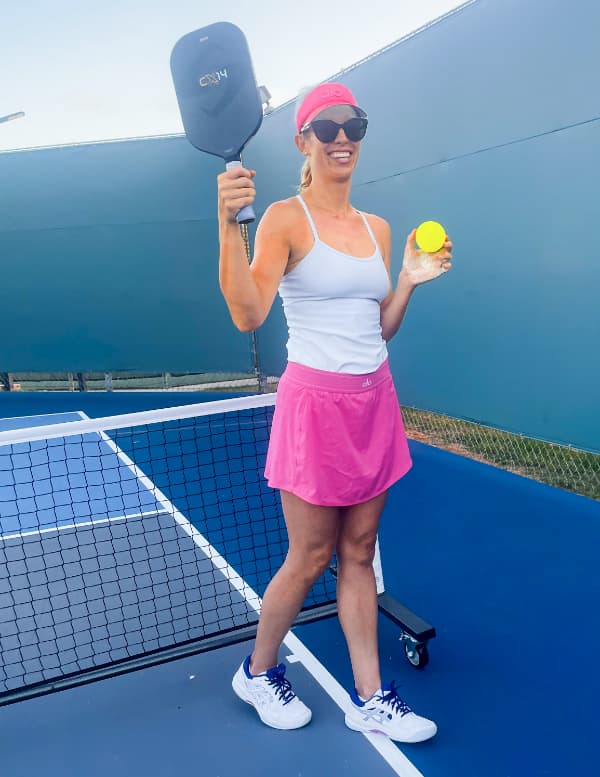 Actually, V started playing on a more social level. So she and hubby, Brandon, went to a “learn how to play” pickleball lesson and subsequently went on to win 4 matches to advance to the championship game. And before she knew it, she was hooked.

“From the very first day I loved it and my goal was to immediately learn how to get really good and get to the next level,” says V.

While V hasn’t specifically mentioned an aspiration of making it to the majors (MLP), she does plan on dominating her “Chickleball” league, a pickleball competitive group for ladies in the region of San Diego where she lives. And how cute is this … wait for it … V personally named her team the Volley Llamas. (Get it?) An appropriate pickleball pun for someone who places as much emphasis on spiritual development as physical and business. 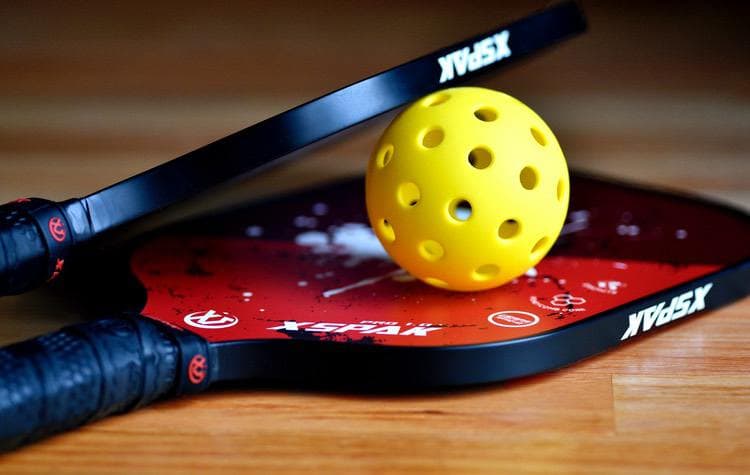 Photo by Frankie Lopez on Unsplash

A Vehicle For New Customers

And of course it wouldn’t be V unless she quenched her thirst on the court with Organic Green Drink. V brings plenty of Green Drink with her, not only for herself and Brandon but for other pickleball players who have never experienced the crisp, refreshing taste. (So much more satisfying than water, especially in this recent heat wave.)

“The Green Drink has been a big social hit,” says V, adding, “When it’s hot and you need nutrients back in your system fast, it’s the perfect beverage.” And just as V has become obsessed, some of her new pickleball friends have become obsessed with Green Drink. 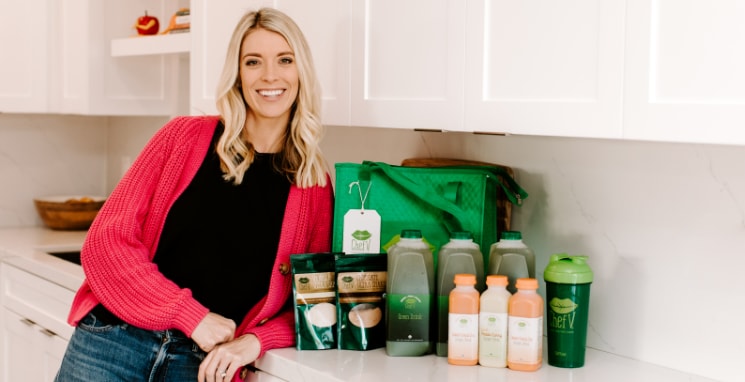 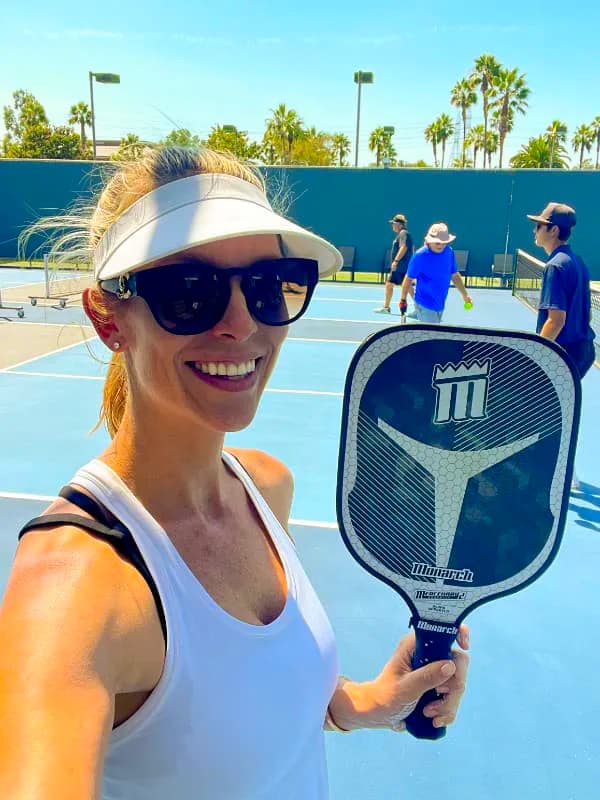 Veronica Wheat, the ‘V’ in Chef V is still obsessed with pickleball. After getting drenched with sweat several times after playing, V realizes the importance of electrolytes. V explains how she not only replenishes electrolytes but also how she fuels her body with them before doing anything that’ll make her lose these precious minerals.

Electrolytes are not something we usually think about. But when you’re playing pickleball like it’s an Olympic sport in 90-degree weather like I did lately, electrolytes matter.

If you don’t have enough electrolytes—or an imbalance of them—it can lead to serious problems: dizziness, fainting, nausea, muscle cramps, headaches, vomiting, tremors and even death.

Some people only know about electrolytes because of high-sugar, artificially-colored and artificially-flavored sports drinks. Obviously, that’s not healthy to drink, ever. But electrolytes aren’t just for serious athletes engaged in sweat-fueled competition.

Many people can name some of the most important electrolytes like sodium, potassium, magnesium and calcium. But do you know what electrolytes are and what they do?

Don’t feel bad if you don’t. I needed a refresher on what they do at a deeper level. So I geeked out a bit and read this research on it so you don’t have to. OK, so here’s what they do in simple English.

Electrolytes are essential for basic life functioning. You wouldn’t be able to contract a muscle, or think clearly, or have your heart beat effectively without electrolytes. These minerals are like mini electricians hard at work in your body. You see, we all have trillions of cells in our body. And each cell requires the perfect amount of electricity. Electrolytes send electrical signals that generate and conduct electricity that flows through our nerves and into our muscles. Without enough electrolytes, your heart, brain, muscles and nerves wouldn’t be able to properly function.

In addition, electrolytes regulate fluid balance in our cells. This helps keep us hydrated. 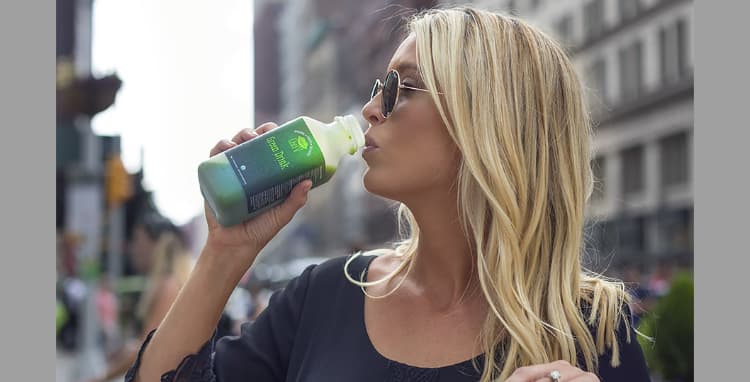 Which Minerals Are Electrolytes And Where Do They Come From?

All electrolytes are important. But the 3 main ones are sodium, potassium and chloride.

Besides taking a sea salt bath, pretty much the only way to get electrolytes is through food and drinks. Yet another reason why diet matters.

Any time you eat or drink something, the electrolytes dissolve in your blood and water. After the minerals dissolve, electrical impulses called ions are created. These ions are to your nerves and muscles what spark plugs are to a car. In other words, they serve as a catalyst. So in essence, electrolytes are the internal body’s spark of life. 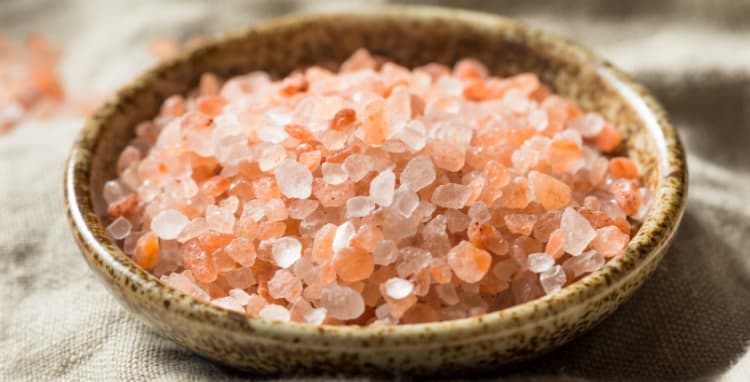 One of the best selling points of a plant-based diet is that it’s rich in electrolytes. Fruits and veggies are hands down the best sources. Green leafy veggies, like the 7 certified-organic ones in the Chef V Green Drink delivery plan are especially high in calcium and potassium.

When you sweat, you mainly lose sodium and potassium. Even though there’s a tiny bit of sodium in Green Drink, I know I need extra if I’m sweating my butt off on the pickleball court or hot yoga.

So what I do BEFORE exercising is I add a teaspoon of Himalayan Sea Salt to my Green Drink. That way, I know that I won’t deplete my sodium and potassium levels. And to make sure they are fully replenished, I’ll have another serving of Green Drink.

Or, if I’m running low on Green Drink or am just in the mood for something else, I’ll make my own healthy, homemade Electrolyte drink. 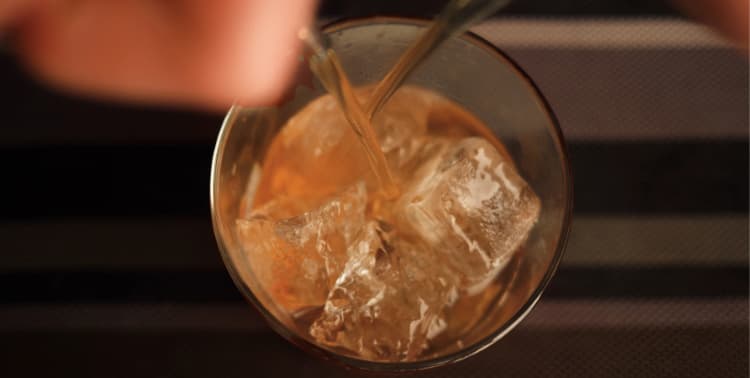 Here’s how I make a healthy alternative to Gatorade and other sugar-filled, artificial sports drinks.

Method:
Blend in a blender. Serve cold. Keep for up to 2 days in the fridge. 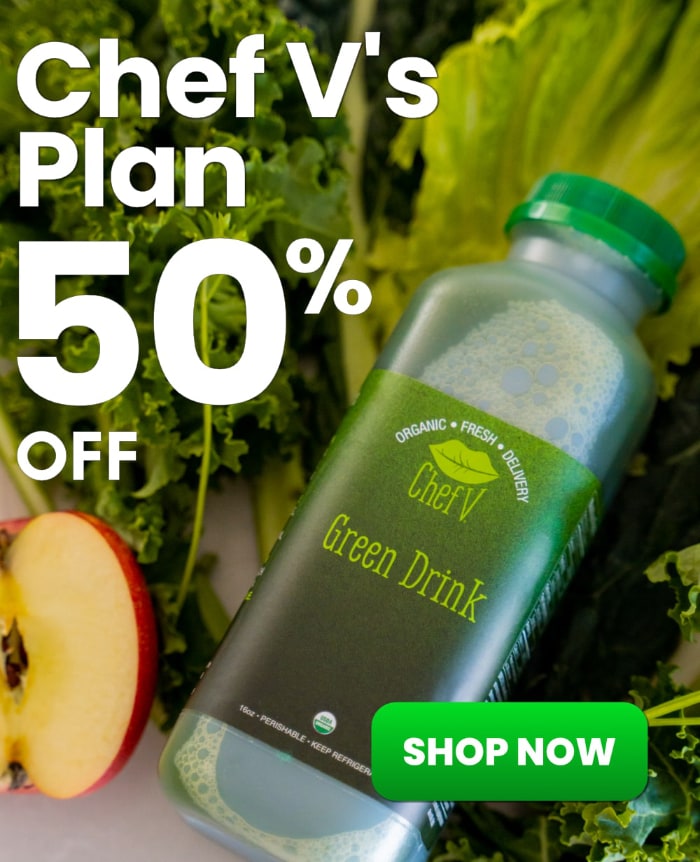